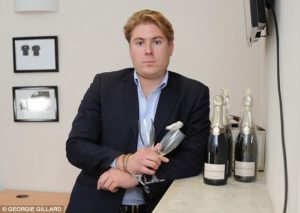 When Jaimie Haselock needed to move 25 cases of champagne, he turned to the internet to find a ‘man with a van’.

A website put him in touch with someone who would do the job and the man turned up promptly and packed the £8,000 worth of champagne into his van before driving off – never arriving at Mr Haselock’s London flat.

It follows the case of a young family from the West Midlands, reported by the Daily Mail on Thursday, who were left devastated when a crook posing as a removals man stole all their possessions.

There are suspicions it was the same man, who in both cases had a Black Country accent and charged £40.

The businessman, 31, arranged for the champagne to be picked up from his mother’s house in Halse, Somerset, on Saturday morning.

She said that the man packed the cases of Louis Roederer into his white Transit van before leaving at 11.30am for the flat in Fulham.

However the valuable cargo was never delivered and – after saying he had given the cases to a man claiming to be Mr Haselock – the man turned off his mobile and stopped responding to emails.

Mr Haselock said: ‘It’s very upsetting and annoying. I’ve used the website plenty of times before with no problems at all.

‘But they’ve also told me other people have had stuff go missing on the same day. And it sounds like the man … could be the same as the case of the family in Wolverhampton.’

Last night the Metropolitan Police confirmed the case was being investigated.

A spokesman for AnyVan.com said three other customers are feared to have fallen victim to the same man and they were assisting the police. She added the driver had spoken to the company and repeated his insistence that someone signed for the champagne.

Source: Man with a van from AnyVan.com runs off with £8k of Louis Roederer champagne | Daily Mail Online